PC games are on the rise, and major publishers like Capcom, SEGA, Microsoft, and even Sony are releasing their games. Steam is firmly at the top of the PC platform pecking order (nearly every publisher has released their own proprietary game launcher, but some, like Bethesda.net, are closing shop) and outside of multi-million dollar exclusivity deals. ‘Epic Games Store, everyone wants their games on Steam for one big reason: that’s where most gamers are. 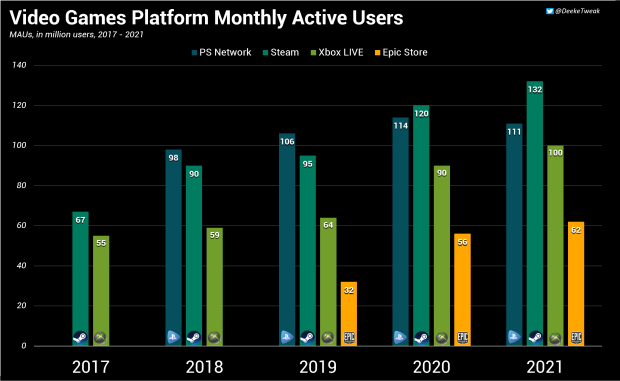 In fact, Steam’s MAUs for 2021 nearly beat the entire userbase of currently reported modern PlayStation hardware. Sony has shipped 134.4 million PS4 and PS5 consoles combined as of December 31, 2021. Compare that to Steam’s 132 million MAUs and there’s only a difference of 2.4 million between PC users and users console.

It’s also worth mentioning that Steam’s MAUs were more than double the Epic Games Store’s numbers. That says a lot considering that EGS is required to play Fortnite.

“There are no bad years to be a PC gamer, but 2021 has been particularly good. From Days Gone to Forza Horizon 5, PC gamers have been able to enjoy an incredible lineup from some of the best studios in console owners of the planet “, Valve wrote in the SteamWorks blog post.

You may have missed